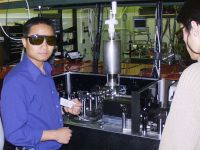 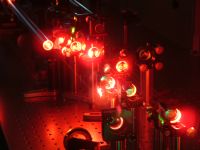 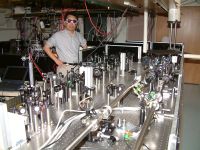 See more photos of KLS in our Photo Gallery.

The Kansas Light Source (KLS) is an ultrafast high intensity laser facility for studying the fastest dynamics in atoms, molecules and other matter under the influence of strong electric fields. The facility was first established in 2001, and is now managed by Vinod Kumarappan. The construction of the system was partially financed by Kansas State University, by the National Science Foundation under a Major Research Instrumentation grant, and by the US Department of Energy.

At present, the laser system provides extremely short pulses, as short as 8 femtoseconds (1 fs=10-15 seconds). That pulse duration is comparable to the period of the fastest molecular oscillations. The focused laser intensity can reach 1016 Watts/cm2, where the electric field of the light is equivalent to the Coulomb field experienced by the electron in a hydrogen atom.

The specifications of the Kansas Light Source are as follows:

The laser system produces 25 fs pulses with 2.5 mJ energy by using the principle of chirped pulse amplification. To avoid damaging the laser amplification medium, 10 fs seed pulses with nanojoule (10-9 Joule) energy are stretched to 100 ps by a pair of gratings. The frequency of the light changes with time, continually from low pitch to high pitch, within the 100 ps envelope, hence it is "chirped". The long pulse width ensures that the laser intensity in the subsequent amplifier is below the damage threshold of the gain material, Ti:Sapphire crystal in our case. After amplification, the energy of the pulse is 5 mJ with 30 ps duration. The pulse is compressed to 25 fs by sending it through another pair of gratings. The compression is accomplished by removing the chirp introduced by the stretcher. The uniqueness of the Kansas Light Source is that the 5 mJ, 30 ps pulses are obtained from a single stage amplifier, while other lasers use at least two amplifiers. This novel design makes the Kansas Light Source easy to operate and maintain.

The 8 fs pulses are generated by compressing 25 fs pulses using nonlinear optics. The 25 fs pulses are coupled to a hollow-core fiber filled with argon gas. The laser intensity in the fiber is so high that the refractive index of argon is changed by the electric field of the laser. The time-dependent refractive index modifies the pulses in such a way that the frequency bandwidth is increased by at least a factor of three. According to the uncertainty principle, such an increase in frequency uncertainty can lead to the reduction of time uncertainty by the same factor. It turns out that the pulses from the fiber are chirped due to their nonlinear interaction with the argon gas. The chirp is then removed by specially designed mirrors that have the opposite chirp.

Up to three experiments can be done simultaneously using the Kansas Light Source by splitting the laser beams. Currently, it runs seven days a week, more than 10 hours a day. It serves five internal groups in the Macdonald Lab and has significantly reshaped the AMO research program in the Physics Department. It has served one user in the Industrial Engineering department and an external user from Argonne National Laboratory. The laser has also been used in the teaching of Optics I, II and III.

We are currently working on providing attosecond light pulses with the Kansas Light Source, where
1 as = 10-18 s. It is based on the idea of polarization gating of the high order harmonic generation process. When an 8 fs pulse is split and delayed with a quartz plate, then recombined with a quarter waveplate, the near-linearly polarized portion of the resultant pulse is only 1.3 fs long, much shorter than the laser pulse duration. A pulse with a time-dependent ellipticity behaves like a half-cycle linearly polarized pulse for generating high-order harmonics that are susceptible to ellipticity. By exciting argon and neon gas with the pulse, a supercontinuum that covers 30 to 90 eV (electron volts) is produced, which corresponds to an estimated single 200 attosecond pulse. The attosecond pulse will be used to study the motion of electrons in atoms, which occurs on a time scale that is too fast to be studied by anything slower than attosecond optics.